"This collection will serve as a very helpful co-text for Parks's notoriously 'difficult' plays as it gives background and context, as well as possible readings of some of the more cryptic lines and figures. In addition, it samples key critical engagements with Parks's texts...Kolin and Young's collection is best read not as a 'secondary source' but as a performance in its own right, dramatizing history in the process of spewing out the biography of Suzan-Lori Parks." - Modern Drama 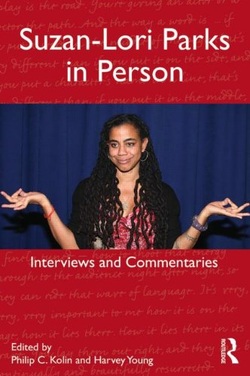 This collection of interviews offers unprecedented insight into the plays and creative works of Suzan-Lori Parks, as well as being an important commentary on contemporary theater and playwriting, from jazz and opera to politics and cultural memory.

Suzan-Lori Parks in Person contains 18 interviews, some previously untranscribed or specially undertaken for this book, plus commentaries on her work by major directors and critics, including Liz Diamond, Richard Foreman, Bonnie Metzgar and Beth Schachter. These contributions combine to honor the first African American woman to receive the Pulitzer Prize in drama, and explore her ideas about theater, history, race, and gender.

Material from a wide range of sources chronologically charts Parks’s career from the 1990s to the present. This is a major collection with immediate relevance to students of American/African-American theater, literature and culture. Parks’s engaging voice is brought to the fore, making the book essential for undergraduates as well as scholars.

“Kolin and Young provide readers with precious access into the process and values of a prolific artist whose work has been broadly performed and read, vigorously taught and analyzed.” – Theatre Survey

“In total, Suzan-Lori Parks offers insights into the playwright’s mind and work, from her undergraduate thesis to her Pulitzer Prize-winning Topdog/Underdog and her international project 365 Days/365 Plays. Kolin and Young provide texts that explore not only how she works but also how she develops seeds of ideas into fully realized productions.” – Comparative Drama

“Suzan-Lori Parks in Person is an essential addition to dramatic literary scholarship, in that it provides a textured, critical—if penultimate—interactive means through which to meet Parks, as a dramatist, a thinker, and as a person whose work continues to prove human relations historically and presently, thoughtfully and dynamically.” – Text and Presentation